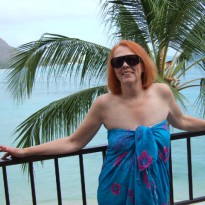 I've been a passionate reader since my mother set a book in my hand at the age of 4 and taught me to read (the same woman taught me how to write on a blackboard before I was 5, making me the only first-grader ever at my school to write in cursive, lol). I read Erotica, Romance (of all sorts), Mystery, Adventure, but alas, no thrillers. My adventure tastes run to Clive Cussler, if I read a cop drama it will probably be James Patterson because I want it to be fast and interesting, if I read spicy romance ...well, you'll see when I start on my booklist. :-)
SPOILER ALERT!

This is a hard Duet for me to review.

Let me preface by saying that I've read every single one of Red's Brie series, of which these two books are the newest additions.

The first book, Safe Haven told the backstory of two characters we'd already met in earlier books of the Brie series - Captain and Candy.  These two were richly described in Safe Haven, almost to the point of being too well described with little to no plot except for the historical narrative and dialogue itself.

Neither of the books in this duo are anything at all like the previous Brie books.  In the series, we've follow Brie Bennett through her first day at the Submission Training Center, all the way through to her marriage to Sir Thane Davis and their subsequent baby.  Once the story of Brie had been told, the other books in the series centered on the main characters such as Tono, Rystar, and Master Anderson. All were highly entertaining and well written, and gave us great insights into their characters as well as gave us lots of steamy scenes to enjoy.

Not so much Safe Haven.  If you were to look at these two books together, Safe Haven is the past, and Destined to Dominate is the present and future. And since I just finished the ARC of Destined to Dominate, I can tell you that it, too, is different than the previous books.  And I use the term different in the sense that it is neither better nor worse than the other books, it tells a story, and Red Phoenix is very good at that, but this Duet, in my opinion, went off the rails slightly. It stopped being about a Dominant/submissive and started to become a vanilla story somewhere along the way. This was more about Captain and Candy both accepting everything in their past in order to move forward and towards each other.

The other part of the duet that I didn't care for is the interchangeable D/s with Master/Pet. Captain and Candy have a Master/pet relationship, which is far more than simple a Dom/sub lifestyle and could be considered far less. In the book Candy compared their relationship with Brie and Sir and she is happy that hers isn't so restrictive.  That struck me as an odd thought, since the entire series of books is about BDSM, but MAINLY about the D/s dynamic, and a lot of previous attention has been paid to the exchange of power that occurs in a good, strong D/s relationship.  So for Candy to dis it, so to speak, surprised me.

Overall I would give it somewhere between 3-1/2 to 4 stars, based on Amazon's rating system, which I think everyone is familiar with. I would caution anyone with concerns about family and death to be prepared to shed many tears over this book.